Founded the Matsubara and Nishitanabe dojos in Osaka, Japan and the Aikido Schools at the Atsugi Navy base in Japan

Ishikawa Sensei is presently the Chairman & President of the Misasagi-Kai Aikido Federation, officially recognized by the Aikikai Hombu Dojo, the World Headquarters of the largest Aikido organization based in Tokyo, Japan. Ishikawa Sensei’s affiliated dojos are located in Tokyo and Osaka, Japan, the United States (including Miami, Ft. Lauderdale, Jacksonville, Georgia, Las Vegas and Salt Lake City) and Germany.

Ishikawa Sensei is universally recognized as an excellent Aikido teacher and remains a humble and compassionate teacher committed to promoting O’Sensei’s legacy. 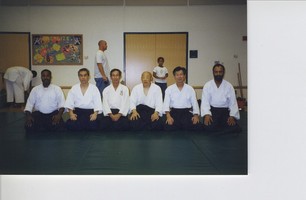 Ferguson Sensei with Senseis Yamano, Hayata and Egawa from the Wago Kan dojo and with Clif Williams Sensei from Ft. Pierce. This 1999 seminar at the University of Miami was sponsored by Ishikawa Sensei.